When I checked out the prompt for the photo challenge, I immediately knew I wanted to participate. Not only was it because it’s such a great prompt but because it was also the last one for 2017.  The problem, however, is what picture should I post, and do I really have one that is the most meaningful taken in 2017?

To me, any pictures I take of my children, my husband (who doesn’t like his picture taken so there aren’t any from this year) or my nieces and nephews and other family members are the most meaningful. I have a bunch, but I don’t feel that I should post them.

My pictures of Newfoundland are definitely meaningful to me as it was the first time my husband had ever flown together, anywhere, just the two of us. But you’ve already seen those.

So, I have chosen to post one of Ivy, the little feral kitten we found back in May in our garage. We have no idea how she got there, but we had to catch her. We live in a rural area and with coyotes, foxes, and the occasional wolf, she would never survive.

This picture is one of the first I took and it shows my hand touching her for the first time.  We thought she was only about 8 to 10 weeks old due to her size but it turned out she was about 4 to 4 1/2 months old. She quickly became a part of our family and will be a year old in January (or so we figure).

I feel that this photo represents her trust, and trust is something to me that is very meaningful.

The following pictures were taken a couple of days ago. Ivy is on the right and Sophie on the left. It took Sophie a few months to trust Ivy but now you can find them sleeping together. 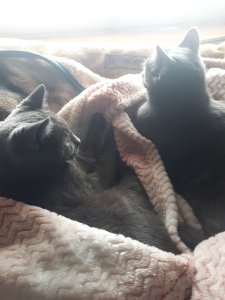 A few days before the above picture, I trusted Ivy with the Christmas tree. In the below photo she is lying quietly underneath the un-decorated tree. 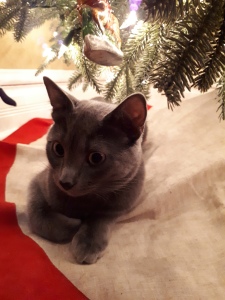 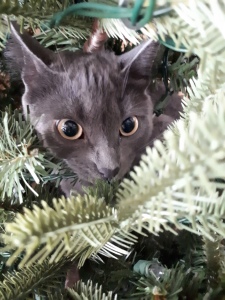 Ivy has become a meaningful part of our family and we are so glad we rescued her.

This site uses Akismet to reduce spam. Learn how your comment data is processed.